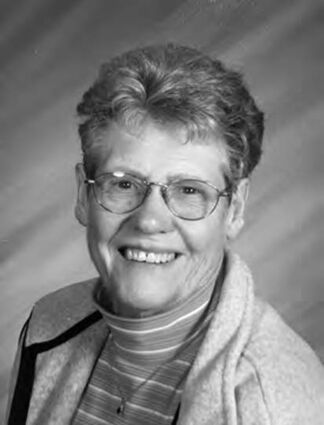 Ruby was born February 3, 1925 to Hester May (Easton) and Evert McClemmons Harrell. She came into this world at Old Fergus Horse Ranch near Fergus, MT She spent her younger years running around the ranch and attending school at Hilger until moving to Idaho Falls, ID where she graduated high school. She married Ennis Lee Tull in 1951. They raised six children.

Ruby was a hard-working woman and mother who always kept herself busy anywhere and everywhere. She cooked and baked in many restaurants, worked as a telephone operator, and an ambulance driver. Her early years in Roundup were spent as a nurse's aide at Vicar's Nursing Home. She was most notably known around Roundup as the owner and operator of The Pioneer Cafe and the Diamond M Cafe in Melstone. Her homemade cinnamon rolls and pies were the highlight. In her first retirement, she transitioned to cooking lunches for Meals on Wheels and Senior Services. Upon her next retirement, she delved into the world of being a Foster Grandparent at Roundup Central School. In this new role of helping kids to read and giving them unconditional love, she filled her soul and theirs.

In her spare time, she loved gardening and tending to her many beautiful plants, flowers, and succulents. She also enjoyed travelling to see her family who are scattered around the US. When unable to see them, she would write them letters to let them know she was thinking of them. She loved being surrounded by beautiful things and would spend time sewing and crafting as well.

Donations in Ruby's memory can be made to Stillwater Hospice of Montana or Musselshell County Senior Services.