Park of the Week

Traveling along gravel secondary roads outside of Boulder, you’ll find the once triving town of Elkhorn, now one of the smallest state parks in the state.

These roads take you through a 19th-century mining landscape before you reach historic Fraternity Hall and Gillian Hall nestled within the privately-owned town of Elkhorn. Bring your camera to record these two picturesque structures from the late 1800's silver-mining ghost town, preserved as outstanding examples of frontier architecture. Each has been recorded in the Historic American Buildings Survey.

Three-quarters of a mile up the main road that runs through town (just outside of the state park property) lies the town cemetery where visitors can see the tombstone of Swiss miner Peter Wys who originally discovered the silver veins in the Elkhorn Mine!

Rich with mineral deposits (including silver), the Boulder Batholith originally drew settlers to the area and led to the establishment of Elkhorn in 1868, now a silver-mining ghost town. The 1880s and 1890s were the most populous times for Elkhorn, drawing around 2,500 residents at its peak, but after the Silver Crash of 1893, the town saw a drop of 75 percent of its population in just two months. In total, the Elkhorn Mine yielded about $14 million in silver.

Only two original buildings still stand (Fraternity Hall and Gillian Hall), but they are surprisingly well preserved and an excellent example of frontier architecture.

While few buildings remain, there are markers noting the remains where historic buildings once stood.

Although a small park, the land around the park is very popular! You’ll find: 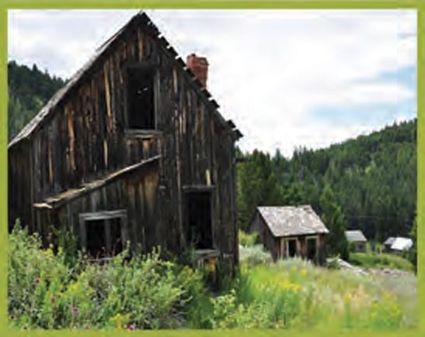 • Learn about the history of the area.

• Plus so much more!

According to a current resident, many of those who reside in Elkhorn today are descendants of those who originally lived in the town!

Modern Elkhorn is a mix of old and new. Amid the two older buildings stand a few new ones as Elkhorn boasts three full-time residents as well as a handful of seasonal ones.