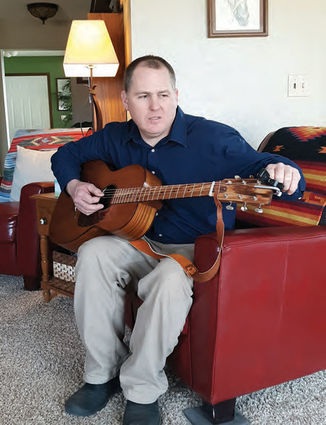 Eldon Coles plays his hand made guitar. The guitar is made from several types of wood. He made the fret board from Applewood, the neck from Mahogany, binding from Rosewood, the top from a Cedar fencepost, the back from a Juniper from Broadus, and the side from a Russian Olive from Broadus, and the nut and saddle are made from elk horn. Eldon made this guitar while visiting at his parent's home in Molt Montana last year.

Eldon has devoted his life to be a non denominational Christian minister, preaching the gospel with his co-worker Cole Larson as it is described in Mark chapter six verse seven. Currently in Montana, Eldon and Cole will be sharing the gospel in Roundup on Tuesday evenings. If you would like to hear the simple gospel message, call Eldon for more information at 406-697-7134.