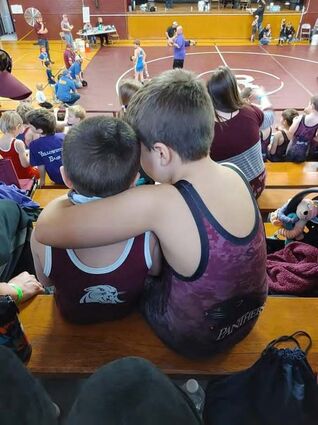 The Roundup Panthers started their District tournament challenging the Columbus Cougars. Columbus were the three seed in the tournament and the Panthers were the six seed. In the last couple of weeks, the Panthers have shown great improvement and they hoped it was a springboard to the district tournament. The Panther defensive effort was outstanding the entire game. Braedan got the Panthers rolling offensively in the first quarter as he scored all 7 of his points in the quarter. AJ and Jace chipped in a two point bucket and the Panther defense really did a stellar job. The Panthers switched between a man and two-three zone. Both defenses were affective against the strong shooting Cougars as they were off balance most of the night. The Cougars have many great shooters and the Panthers were able to find shooters and challenge shots all afternoon. The second quarter was more of the same as the Panthers outscored the Cougars by one point to trim the lead to 23-22 at the half. Our leading scorer for the season, Kaide, was held without a point as the Cougars made a concentrated effort to keep him from getting the ball or shots. The rest of the Panthers stepped and took advantage of their opportunities. The third quarter was our nemesis again as the Panthers could only muster 5 points by Jace but the defense was up to the task keeping the Panthers within shouting distance. The Cougars built an eleven-point lead early in the fourth but the Panthers fought back with some timely shots by Kaide, Michael, and AJ. The Panthers cut the lead to four points but could never break that barrier and lost 50-44. 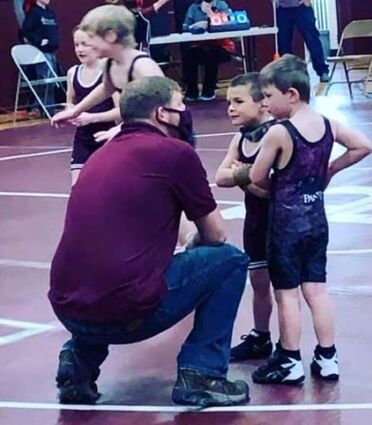 Coach Stahl gives a pep talk to Landon Bruner and Leighton Nellermoe before the tournament starts, while Breanna Bruner and Dylan Salthe warm up in the background.

Friday afternoon the Panthers took their energy and game to Huntley to take on the Jayhawks in a loser out contest. The Panthers had been beaten by the Jayhawks during the season and were looking to even the score. The Panthers got off to a great start led by Jace on the offensive end and a great defensive effort. Jace had his most complete game of the year scoring 21 and grabbing 10 rebounds. The Jayhawks tried their 1-3-1 half court trap but Kaide and Michael handled the pressure at the top and Jace did a great job of finishing on the backside. Unbelievably, the Panthers did a great job from the free throw line which kept them in the game throughout. The Panthers were ahead 13-12 after the first quarter. The second quarter was much like a heavy weight prize fight as both teams traded blows but refused to go down. AJ, Kaide, Wyatt, Jace, and Kylen scored in the second quarter to provide a very balanced attack on offense but the Panthers trailed 28-27 at the half. The third quarter has been a problem of late and Friday was no different. The Panthers started slowly but finished the quarter strong as AJ hit a couple of baskets back to back. The Jayhawks would creep out to a 7 point lead but the Panthers would make a play. Kaide hit a couple of three-point shots late, Jace had two old fashioned three-point plays, and the Panthers refused to go away quietly. The Jayhawks did a good job of making their free throws late and held the Panthers off to win, 58-52.

The Panthers had a tough year as far as overall wins and losses but made improvements every day and it showed at tournament time as they played their best basketball of the year. They would like to thank all the Roundup faithful for coming and supporting them.