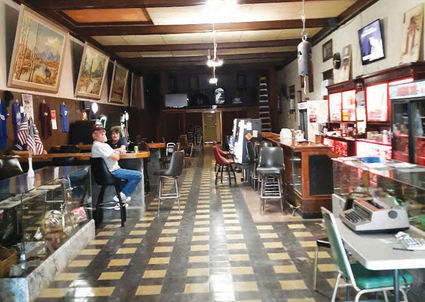 A long, long time ago in good ole Roundup, a Miner named Charlie Thomas along with Curlee Mihalovich, built the building that would become the Arcade bar. Arriving in Roundup in 1908, Charlie worked for a spell in the No. Three mines, perhaps building up relations with his future customer base. He then started up three bars, one of which was the Mint, and finally the Arcade with his compadre Curlee. As fate would have it, they had hardly begun the new bar when the doggone prohibition came into effect. Not to let it stop his great plans, Charlie and Curlee transitioned the bar to a "soda fountain", cigar and sporting goods store with card tables in the back. Conveniently, there may have been a button to push in the front of the store had an inspector happened along. In 1932, prohibition was over and the sauce was back for all to partake openly. Charlie lost his old pal Curlee sometime before 1944, when Charlie's son George Thomas began working with his father. Charlie passed on in 1958 and George assumed the business of the Arcade.

Like his father, George had a longtime employee Jose Kowalski who worked at the Arcade past George's retirement. George sold his business to lifelong residents of Roundup, Alvin and JoAnn Mills and Mike and Shirley Gecho, (the Mills' aunt and uncle) on June 1st of 1983. The business was then continued in operation by the Mills who bought out Gecho's in 1997. Joe Kowalski worked for them for a spell but died of heart attack.

The Arcade stands today in the true original fashion with the billboard painted with" Arcade" on the brick exterior and a light sign on the front. Inside you feel like you stepped back in time. The original bar and crafted wood display cases are nothing short of impressive. Over the years the stories have piled up around the taxidermy animals hanging, and the massive paintings that line the wall. The artwork was done in 1971 by local artist Fred Trussel. The Arcade has an antique bowling alley in the basement, and they used to sell hunting & fishing licenses, cigarettes, and chew. There was music on the stage till the Association of Songwriters, Composers, and Music Publishers (ASCAP) started bugging them, then they closed the stage down.

JoAnn spoke of her husband Alvin who passed away nine years ago. She said that Alvin was the story teller, he wrote about everyone. If he liked you or didn't, you knew because he would write about you and put it up on the wall. His poems were posted in the bathroom about everyone, especially if he didn't like you. I asked if those historical treasures of gossip were still to be found, feeling a sudden urge to use the lavatory. Sadly, she said they had been removed.

JoAnn spoke of the cattle drive as one of the most memorable and busy times of the Arcade. She said the place was unbelievably busy the week before and when it was over the "whole town folded up". 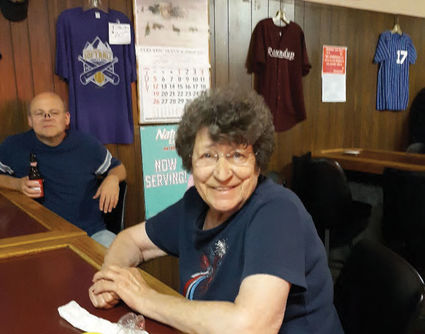 JoAnn has faithfully run the historic Arcade since the passing of her husband. She currently has the business for sale, and would like to retire in glorious fashion by staying in Roundup and never joining another club or organization as long as she lives. She informed me that she was planning to do some quilting but, "I am not joining anything else ever again". During her time in Roundup she has belonged to the Chamber, the Fair board, Baseball, helped build the ball field at the fairgrounds, and was always busy with baseball kids. Perhaps the Bahamas, I suggested, but JoAnn said no, she is staying in Roundup to the end with the exception of visiting family in Idaho. Deathly afraid of snakes, JoAnn is looking to keep her grass short and her pants long. (I just invented that last part, but she REALLY doesn't like snakes)

There aren't to many places in Montana where you can see a full taxidermy Baboon, a soda fountain, a bowling alley, and fantastic paintings, all while slugging down brew, in one stop, so I recommend to all, go to the Arcade before JoAnn sells the iconic Roundup business.

I felt a bit whimsical while writing about this fun little place, but after all, the Arcade was always meant to be a place for a good time. As one of the last original Roundup businesses continuing in its original building, I hope that JoAnn finds a great buyer to maintain the history, and that JoAnn enjoys a long and peaceful retirement.