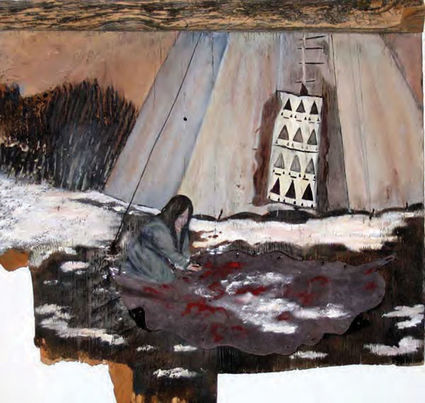 For months we've been chronicling people that migrated to Montana to carve out lives and deaths, farms, ranches, railroads, mining industries, towns, and what have you. We haven't forgotten the one's that already were here, the American Indians or Native Americans, as you prefer. Of course, they themselves were just earlier migrants, but they lived and worked and built things, too, not to mention taught the white intruders tricks for living in their new territory, so they deserve to be included. Further, Jane has several imaginative and informative paintings to illustrate this part of the series.

We can't begin to treat, even at our usual, superficial level, all the tribes that inhabited Montana, so we'll concentrate on the one nearest Roundup today, the Crow. We've learned a number of things about them that are new to us, and perhaps you will, also. For sources we've relied upon available web articles and the Encyclopedia Britannica, but we benefitted from several interviews with Mr. Albert Gros-Ventre, who was, at the time of the paintings, the cultural spokesman for the Crow Nation.

The tribe's name for itself is Absa'alooke or Absaroka, meaning "Children of the Large-Beaked Bird," and was given it by a neighboring, Sioux-related tribe. French interpreters turned that into "People of the Crow," whence English speakers picked up "the Crow." In other tribes' languages these people are also "Crow" or "Raven." Just think: if the French had got an earlier look at a blue heron, which has a much larger beak, things might be entirely different.

The tribe's first home was in Ohio, around Lake Erie, from which aggressive neighbors drove them west to Manitoba. Thence, they moved to North Dakota but were pushed farther west by the Cheyenne and the Sioux, groups that were destined to give them years of trouble. They came to dominate a large area from west of what would become Yellowstone Park, north to the Musselshell River, northeast to the Missouri River, southeast to the intersection of the Yellowstone and the Powder, south and west to the Wind River Mountains.

In their Ohio homeland they had been farmers and hunters but adapted to the Plains Indian style as hunters, gatherers, and nomads. Before 1700 and still without horses, they hunted bison and used travois, frameworks made of tree parts, to be dragged over the ground by dogs to transport their belongings. The poles for travois were used as the supports for teepees, their traditional housing.

Prior to their acquisition of horses, an observer estimated they had 500-600 dogs, used also as sentinels, as well as pack animals. Today we feel that moving is bad enough, but what if one had to harness a pack of dogs in order to relocate or to take a trip?

Hollywood representations hint at dogs' serving another purpose when food was short. We're rather certain of having heard the uncomplimentary name, "dog-eaters," in a John Wayne movie involving a different tribe. Horses could be used in the same way and, in parts of the world still are – they're on the menu in Yakutsk, Russia - but more about diet later.

Hunting bison had to be done on foot, and anyone that has observed one at close range appreciates their great size and surprising speed. Sometimes using wolf pelts draped over their bodies as disguises, the Crow huntsmen would stalk near to the bison before attacking it with arrows and spears.

Even before horses, another tactic was stampeding the animals to their deaths over a precipice known as a buffalo jump. This was done on your authors' own property – a little before we arrived on it, of course – and local people claim that thousands of arrowheads and numbers of buffalo skulls were found not far from our barn. (Unlike minerals, there are no laws about arrowhead rights, and no one buys the assertion that those found on our property belong to us.) In some instances the medicine man called down blessings on the men that would drive the animals, and a ritual ensued before the hunting commenced.

Quite a surprise to us was that the arrowheads used to dispatch the huge animals were not at all large, but what we would have called "bird points" from artifact-hunting in New Mexico. Apparently, the Crow practice was to utilize a large number of small points.

From the middle of the 18th century they possessed horses, obtained from southern Plains Indians, Comanches and Apaches, who obtained them from Pueblo Indians or stole them directly from the Spanish. Horses had a profound effect on the existence of the tribe, and The Crow became noted as horse breeders and dealers and, emerging as middlemen, maintained very large herds. In 1914, long after the establishment of their reservation, they were said still to own 30 to 40,000 head, whereas by 1921 only 1,000.

The Crow traded horses, bows, shirts, and feather work to the village Indians in return for guns and metal work, some of which they transported west for trade with other tribes.

The bison and the horse were vital to their lives. From the former they obtained food, clothing, robes, moccasins, teepee covers, thread, containers, and shields. The hump, liver, heart, kidneys, and tongue were considered the choicest meat, some of which could be dried or smoked, and bison stewed with wild turnips was popular. They burned bones and cracked them open for the marrow, and the women cleaned the bladders, which served to carry water. Transportation was a great obstacle, and quantities of meat were left for coyotes and other scavengers.

As said, housing was teepees, for which the material was bison hides. To use a skin the women faced the tedious first step of scraping all scraps of meat from it before it could be processed. The mixed-media picture, "A Woman's Work," captures a Crow woman engaged in that task. To emphasize the actual substance and labor of the work involved, the painting incorporates a section of leather to represent the bison's hide.

With horses, naturally, the mounted hunters could ride among the targets and kill them with arrows, lances, and later, rifles.

Between contending tribes, skirmishes were frequent, raiding for horses the principal warfare, and a man's leadership and valor were appraised according to the number of coups he achieved. A camp might hold a number of chiefs, where to gain that rank, a Crow man must have had four coups to his credit. These were leading a war party without his men's loss of life; stealing a tethered horse from an enemy camp; striking an enemy with a club called a "coupstick;" and wrestling a weapon from an enemy.

One man from the group of chiefs became leader of the camp. We can imagine, then, that the chief remembered today as "Plenty Coups" must have accumulated quite a number of such triumphs.

Crow women wore dresses made of deer and buffalo hides, moccasins, and, in winter, leggings. Men had shirts, moccasins, leggings, and long breechcloths tucked into belts. The leggings were of animal hides or, after the coming of white people, wool. Surprisingly, in Europe were made wool leggings specifically for Native Americans. No, they had no mail-order catalogs, but white men brought such articles for trade.

They admired shiny hair and, probably hoping no bears would come investigate, used bear grease to achieve it. Women wore two braids, as sometimes did men, and hair was generally long, perhaps reaching the ground. The Crow also were known for wearing their hair painted white and in a pompadour.

Warriors and medicine men displayed stuffed birds in their hair, and eagle, crow, owl, and other feathers were popular in coiffure designs. Headdresses included eagle feathers and the scalps and horns of bison, and the Crow tribe was noted for beadwork, which they used to adorn their clothing, horses, cradles, and all manner of ceremonial objects.

From 1800 forward there were battles between the Crow and the Lakota Sioux, often helped by the Cheyenne, sometimes by the Blackfeet. In 1825 was signed the first treaty of friendship and trade between the United States and a group of Crow, but it must be remembered that there were four sub-tribes of the Crow Nation, known as the Mountain, River, Kicked-in-the-Bellies, and Beaver-Dries-Its-Fur. After "Children of the Big-Beaked Bird," these latter designations are no surprise, but it is not the case that the French were always into the firewater. We have found no explanation for the naming of the Beaver bunch, but in the early 1700s a Crow party bought or stole a horse and brought it to their camp along the Upper Wind River in Wyoming. The people had never seen one and gathered around to scrutinize it. One fellow strayed too near the hind legs and got a shot that sent him rolling over in the dirt. His amused friends nick-named him what we would expect, and, thus, the name of the group. 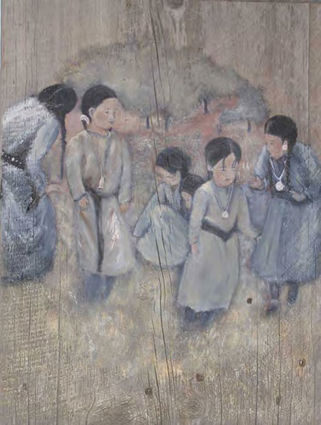 With peace declared with the U.S., the Sioux were able to concentrate on inter-tribal warfare, and they, together with the Northern Cheyenne and Arapahos, combined against the Crow. Soon, the Sioux forgot the truce with the U.S. and attacked both soldiers and civilian whites along with the Crow. The latter asked for U.S. military intervention against the trespassers, and the Bureau of Indian Affairs recommended that troops force the Sioux back to South Dakota, but nothing was done.

The Crow sided with the U.S. in the Sioux War, 1876-77, and 23 of their men enlisted as Army scouts. Their old enemy were then in Crow country raiding them on their own reservation.

In 1878, two years following the massacre of Custer and his forces, 700 Crow teepees were camped with Col. Nelson Miles (for whom Miles City was named) at the confluence of the Yellowstone and the Bighorn Rivers, to celebrate the Army's victory over the Sioux.

That ends our little historical introduction to the Crow Nation, and next week we'll examine some aspects of their religious beliefs and practices.