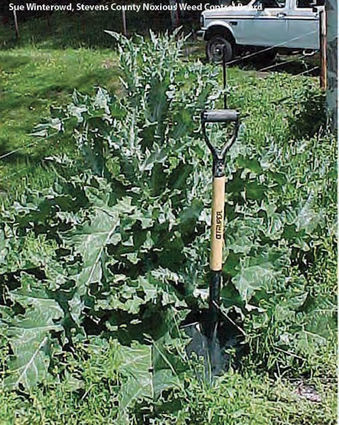 Scotch thistle is a robust non-native thistle that is becoming a big issue for Musselshell and Golden Valley Counties. Scotch thistle is not on the Montana State noxious weed list, but has been listed as an invasive species that need to be controlled by both counties Weed Districts. Scotch Thistle was introduced into the United States during the 1880s possibly as an ornamental and /or as a medicinal plant. It is now abundant and problematic in the western U.S. with infestations that can form tall, dense stands that impede livestock and wildlife access to desirable forage plants. Scotch this...