THE SPLENDOR HAS GONE FROM THE GRASS 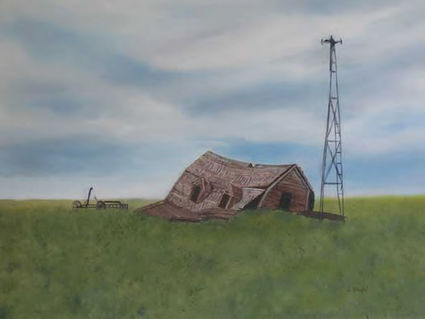 William Wordsworth wrote about the "hour of splendor in the grass, glory in the flower," but if left unchecked for any length of time, western grass, with help from its friends, the winds and other elements, has a way of obliterating splendor.

For a reference point we need to glance back at last week's history, that of Ira and Bessie Carey and their six children. Whereas the two sons were our previous focus, it's a daughter in line for today's attention.

Around 1917 the ranch with the derelict car was the homestead of a man named Thomas Grist, certainly an appropriate name for someone in agriculture, who built the log cabin that we saw still standing on the property. Neal Gresens' parents bought it from Grist, and when Neal married Irene Carey, the eldest of those daughters, the two took up residence in the corn crib until his parents sold the ranch to them.

All we can offer to that is "Wow!" One of your authors spent parts of an unpleasant summer shoveling ears in a corn crib, and the number of mice, alone, would discourage any bride from accepting one as housing. Montana people, though, are exceptional, and that incipient family made successes of small things.

Our happy guide that day was the daughter of Irene's sister, Helen, Marge Holmlund, who had played there as a child, and, as we looked around, her love of this land was beautifully evident.

In the 1920s the Gresens, graduated from the corn crib and the log cabin, built a tiny house that accommodated themselves and the four children, who slept in a single 6' x 6' bedroom! Their

secret? Just a pair of homemade bunkbeds, but luckily none of the kids was tending towards NBA proportions. Finally, child number five doomed that house, and the parents settled in the last of the series.

Some distance from it, in a refuse pile on the crest of a small hill, were the remains of their car for the seven of them, a circa 1948 Ford sporting a 1955 license plate. The carcass, rusted nearly pink, looked imperial among decaying farm equipment and unknown junk. There may have been no splendor in this grass, but the people had their share of glory and success. 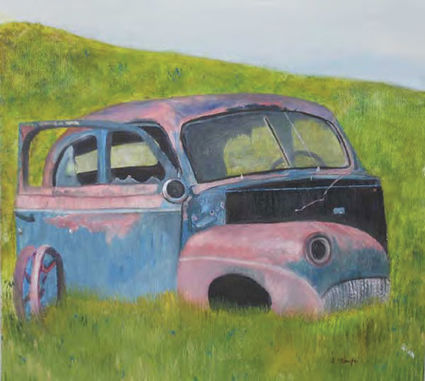 "Waiting for the Seven Gresens"

The half-acre of land in the next melancholy painting was the homestead of a man named Charles Schrader, and the Schlotts, who gave the ranch their name, built the house. In 1948 Ralph Holmund bought the ranch, so his children were just a mile away from school.

It was large, two stories originally, and even provided with a basement. At our introduction to it, the lower floor was fighting to keep the upstairs above ground, and the cellar was just a memory. It reminded us of a mortally wounded elephant struggling to regain its feet. Today, we understand the collapse became final and that the ruins are no longer visible from the nearest road; they have been interred by the vegetation. Compared to many ranch homes, this one had been rather splendid, so these grasses may deserve the poetic attributes.

The wind generator gives a proof of the climate, and who could resist identifying the wreckage of the implement to the left? Of course, it's a Schlott machine.