An Artistic Tribute to Womanhood 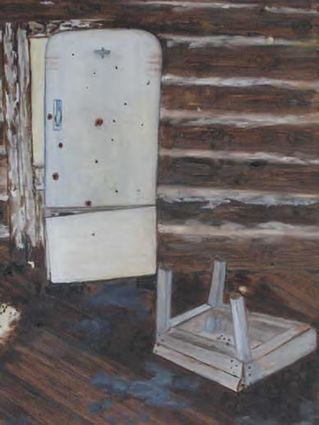 Now Only a Target

Chris Burgel was a card-player. As his luck ran, so did his livestock; when he had money, he had cattle, but when he lost, he had to settle for sheep. No records remain to show which species was the more prevalent, and a person couldn't guess from the split log house and board building, both lodges for rats and mice, which are what one raises when the money runs out altogether. Long before we arrived on the scene, Mr. Burgel had sold out – possibly the cards had turned too sour even for sheep – and other owners had come and gone.

Inside the decrepit buildings remained a number of some discarded family treasures and necessities, and from these the artist of this partnership interpreted the testimony and history of generations of women, not just those confined by the endless plains and the twin oceans of work and responsibility lapping on every grassy shore. The artist has been praised before for this power of understanding.

In the June/July/August, 2008 issue of Gallery & Studio, critic Maurice Taplinger titled his exhibition review, page 11, "Jane Stanfel Evokes the Silent Poetry of Forsaken Places," and the paintings reproduced in today's article were among those included in that show. He wrote, "There's an elegiac quality to the paintings of Montana artist Jane Stanfel that can sometimes remind one of Andrew Wyeth. This mood is especially present in the series that Stanfel calls 'Ghost Ranches of Montana,' on view at Jadite Galleries, 413 W. 50th Street ... while her oils on canvas and old barn wood are filled with feelings, the thrust of her work is never maudlin or merely nostalgic ... her paintings have a formal rigor to match their emotional resonance. Stanfel has obviously the 'back story' of the historic sites and ramshackle structures that she paints, endowing them with all the dignity of ancient Greek ruins."

When we discovered the refrigerator in "Now Only a Target," our thoughts drifted farther back than to when that antique appliance rolled off the assembly line.

We remembered watching huge blocks of Nature's coolant grasped with steel tongs from the trucks, slung over the wet backs of deliverymen, and loaded into the rear compartments of our grandparents' ice boxes.

Think, though, of the female immigrants to the Plains. There might have been a surfeit of ice in the winter, all right, but in other seasons they were expected to feed their families without the aid of even primitive appliances. If they had ice boxes, they were holes dug into the dirt, where blocks of winter ice were stored until they had melted away.

Within rough walls like these and in tents and caves excavated into hillsides, a woman delivered new generations, then nurtured, clothed, cleaned, educated, and raised them with intermissions to help her man out of pinches when she was needed on those fronts with the heavy work.

It could have been worse for her than this, however; she and the children might inherit ALL the work, hers and their father's, while he worked on another farm or for the road department for the money they needed. It's easy to speculate about how many women that supported their mates by traveling west seeking new lives entertained wistful thoughts about the old lives left behind and dreams turned sour.

Above, we alluded to women's work in connection with children, and "A Woman's Life" features two implements closely interwoven with those duties. We don't profess that these examples are particularly historic, for that would classify us as equally so.

We wheeled around our own children in a pram that was a dead ringer for the one abandoned in that house, and Jane remembers a similar vehicle among her grandmother's possessions. (Hmm. If this antiquates us, we can't escape.) That model would not have worked well for an outdoor walk around the Burgel house, but was used indoors and outdoors to rock a crying baby asleep near where the mother was working. The pioneering women also required strong arms for transporting their babies.

Women often bore a roster of children rarely heard of today, and our previous articles have emphasized the difficulty sometimes of getting them to schools, so guess who was selected to wear the hat of teacher when that happened? If a woman's ranch was nearer to the school, she might have a share in caring for the neighbors' kids, as well – perhaps for entire winters.

Both of us were always fascinated by the wringers on washing machines. A sopping bundle of something was fed in on one side and converted into a dryer, two-dimensional sheet of something extruded on the other. Thence, our mothers lugged baskets of our two-dimensional clothes, bedding, and towels up steps or from unheated out-buildings, shook the shapes back into them, pinned them on ropes in the yard, and propped up the ropes with poles so they wouldn't scrape the ground while hopefully capturing sufficient breeze to dry or in winter freeze dry.

This is a simplified version of what really happened. There were no paper diapers bought in large boxes and discarded to wastebaskets. If one's child or children were wearing diapers, first the defecation had to be shaken into the outhouse toilet or wherever deemed safe. Then the diapers, made from usually white rags, were soaked in a large container to remove much of the urine, followed by boiling them in water and probably lye to sanitize the material. Meanwhile, boiling water - at least very hot water - was placed in the washing machine. With a large stick the boiled diapers were taken from the boiler, fed into the ringer, which dropped them into the washing machine, rinsed thoroughly, then fed into the ringer again, only this time to hang outside on the strung lines. Soap or more lye was added to that same water, for water was never wasted. That was then used to wash baby clothes and adult white articles. Once cleaned, they were then wrung into water drawn into a basin and soaked to rinse, then wrung again to hang outside. Following the same procedure, the lightly colored clothes were placed into the same precious water and washed while the white articles and diapers were hung to dry. This same process was followed for overalls and dark clothing. Needless to say, the same clothes were not casually thrown to wash daily.

These were the lucky women that had washing machines, while others followed a more arduous pattern; they pounded the clothes clean on rocks down at the nearest stream, then toted them home, likely uphill, to the clothesline step as above. Others would boil them, then hand-wring before hanging.

The painting, "Grandma's Favorite Chair," an article in the Burgel house, admitted a little relaxation or dining celebration! Perhaps, though, the pretty chair's shattered state suggests there was enough work to exhaust the ration of comfort built into it when the lady of the cabin sought a little respite from her never-ending round of labor. 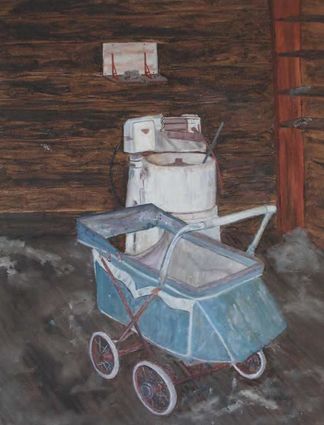 What of today? When most men go off to work on the modern ranch, it's not to some bone-breaking challenge like taming a wild horse or hitching himself up to a team of horses to plow or harvest, but they still must brand, water, feed, and care for their cattle and other live-stock, now and then fell a stand of big trees and run their modern tractors to do as years ago. Whether by necessity or choice, however, the women often help support the households by going off to outside employment or working side-by-side with the men in the field. As to the children, women are still expected to dress, clean, feed, and begin the education of them, along with maintaining clean homes, creating good meals, and harvesting their private truck gardens.

In spirit, arrangements have not changed as rapidly as the years have flown. It is understandable that the artifacts of the Burgel house bring to mind the contributions of women, past and present, and motivate us to seek to honor them.