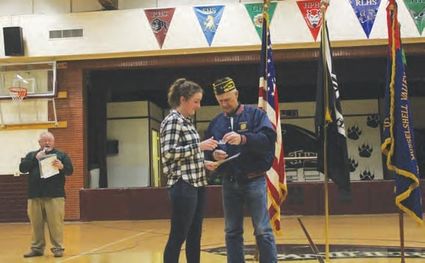 Hannah Bedford - Presenting her award is Commander Bill Turner who served in the Army from 1964 to 1966. He was an AirFrame Repairman, Parts Manufacturer from helicopter blueprints in Vietnam.

An Awards Ceremony was held December 20th to Celebrate Student Achievements in Grades 7-12. All 267 students attended, as well as to show Appreciation to some local veterans for their sacrifices. More photos on page 5.