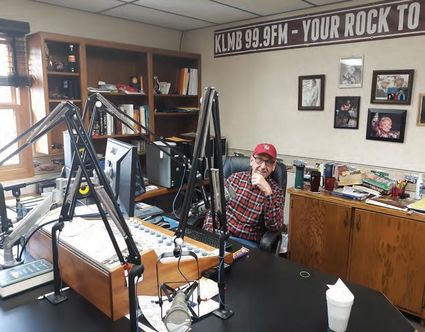 Radio has been one of the great loves of my life from the time of my youth. The music, the ball games, the talk shows were carefully tuned in on my stereo. Radio was my invisible friend and companionship in the remote country of my youth, where the social world was far away from my reality. After doing some small stories on local people for the Roundup Record, I knew that I wanted to interview Bill at KLMB Radio, Roundups local radio station.

As I walked in the door, Bill greeted me and directly offered me coffee. I knew that moment that he was my kind of guy. Cheery and filled with great stories, the type of folk that makes Roundup such a unique community.

I was introducing myself and chatting over coffee when Bill told me that when he found out that women rule the world, his life got easier. I knew this would be a comfortable chat. He already understood the rules of life. (Side note for the serious people; We're both joking) I wanted to know the history of our radio station. Bill said he started doing radio in 2001. There was another man in Roundup who introduced him to announcing ball games. They sent these out on a hobby radio that you could only hear for about two blocks. It was 97.5 then. People would come to the parking lot so they could listen to the games. Bill decided he enjoyed sports announcing, and he applied for a commercial license to improve the reception. This was very difficult and required a large amount of money and a lawyer. The license had to be bid on through the FCC. It was unsuccessful. Finally, he was able to get a noncommercial license, but could not sell advertising. Three years ago, he was ready to trade his noncommercial license for a commercial license. He is now up to 5000 Watts and can sell advertising.

The Roundup radio station is surprisingly modern. Bill has computers, microphones, sound board, and programming equipment that was way above my understanding. Bill has a very large music library that includes everything from oldies, country, to Rock and Roll, and "Top 100 Hits". He runs an old-time radio program every afternoon. Bill and Mike Morgan do a Saturday

Bill runs the entire station independently. This is an enormous task for one person, and at 77 years old, Bill knows he would like to retire at some point. I asked him what the future looked like for the radio. He said he would like to find someone interested in communication to keep it going. He said it has been a costly but rewarding venture for him. The future of the radio will depend on someone committed to taking an interest.

Bill is a pillar in our community for many other reasons than just the radio. Bill does many activities that help the community besides announcing the Ball Games. He gives a platform for local people to share what is going on. He is involved in the future monument for Teddy Blue Abbott. "A car stopper," and other interests in the community.

The Roundup radio KLMB 99.7 is also available on the internet, Edwards broadcasting, and has an out of state following. He gets called from Georgia, Florida, Washington, Seattle.

Bill said he is planning to start a "tradio" program that will run a couple days a week. We will be looking forward to this opportunity for the community to sell through the radio. Bill is a real "character," I enjoyed his humor and dedication to his work. I hope he will be running his local radio for many more years.