THE BEECHER RANCH AND STAGECOACH STOP 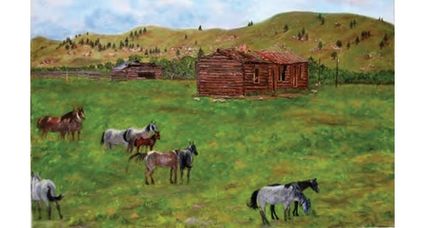 A little east of the Grass Range area is perhaps the most variously owned and used land and buildings in our entire series.

Long before homesteads, in the 1880s, when stops were about 15 miles apart, the distance covered in one day, it was a stagecoach stop on the Ft. Benton – Billings line. Coaches carried passengers, gold-mining equipment, and supplies for places like Gilt Edge, Flat Willow, and Musselshell. In the picture, "The Stage Station," the foreground building was the hotel, with small rooms along both long sides, the more distant was the stagecoach barn and corral.

As a cattle ranch it began as the Dovenspeck homestead, then was bought by the Middletons in 1927, after which it was owned by the Millers, then the Olsons. The last were successful sheep ranchers with 500 head until their sheepherder, named Flurry, allowed his dog to drive the entire herd into a snow-filled coulee. When he saw this, Flurry calmly walked into the diner where Mr. Olson ate, had his dinner, and then broke the news. Crying desperately and somehow refraining from murdering Flurry, Mr. Olson tried to save his sheep but lost both them and the ranch. The family might have starved had it not been for his daughters' hand-raising 70 motherless lambs. With the sale of those they survived the winter.

As elsewhere the depression years were hard times there. With unscrupulous parties hoping to grab lands that contained watering holes, many law suits were filed for alleged injuries or problems.

During the 50 years ending in 2012 the place belonged to five separate owners. Ray and Marjorie Beecher moved there in 1996 to raise black angus cattle and quarter horses. Their house, a distance from the stagecoach stop, was originally built as a home for delinquent boys, with six bathrooms, many bedrooms, and a large, friendly kitchen. We were surprised at the location, clearly difficult to access at times, down a steep, rugged road into a sort of hole in the land with a running stream as back-drop. Any delinquent boy assigned there would have exhausted himself attempting to escape up that hill. In 1936 an earthquake changed the original course of that stream and placed it where it presently flows.

Clearly Mr. Beecher was an avid, local historian, and in 2007 we went there at his invitation. Having heard of Jane's work, he wanted her to preserve pictorially the stagecoach buildings that were crumbling just as he feared he himself was.

At that date Mr. Beecher was about 86, rather infirm, and his wife was the spirit and the mover of the pair. Nevertheless, people that knew of him had remarked that he was a very sharp horse dealer. He drove us up to the stagecoach station, where the stallions then kept their harems in check, and as soon as the horses noticed his cake-laden pick-up truck, they trotted over for their shares of the treats.

When the painting premiered at Jane's Lewistown Arts Center exhibition in January, 2008, the Beechers attended, and when he took Jane's arm and hobbled up to inspect it, Ray's eyes filled with tears. He must have that painting, he said, but claimed to have no money, so he proposed a trade with the artist; in exchange for the picture he would give her 4th pick of the next crop of foals.

Larry was relieved he didn't raise elephants, and we lacked the facilities for any 4-legged item of livestock, but a horse might be attractive as grandchildren amusement and perhaps we could board it somewhere.

In early summer Jane solicited a friend and horse expert, and they drove up to the ranch to select one. At that point Mr. Beecher earned anew his reputation as an acute dealer, for every colt the expert wanted had already been taken – far deeper than 4 down the list.

We still managed to acquire a fine, registered quarter-horse, a blue roan, which wasn't blue at all, and when we delivered the painting, the Beechers had invited a number of friends and neighbors, all of them also history buffs, to regale us with other tales, which led to the subjects of next week's article. To the accompaniment of much joy and praise, Jane installed her painting over the sofa in their living room.

Mr. Beecher was so pleased he decided he would like a second painting, "Winter Mishap," which commemorated an eventful day many years past, the capsizing in snow of a huge wagon load of hay. When Jane had executed this, he was again well-pleased and proposed another horse swap, but, as we were not planning to operate our own stagecoach line, she declined.

Our stallion, named "Gumbo" by our grandchildren after the gravel-free stretch of road that ruins so many of our plans, proved to be too highly-spirited for an inexperienced child rider. His keeper sent him to school to learn barrel racing and to pay for his education sold him, with our permission, to a practitioner of that sport. His current whereabouts are unknown to us, and we can only hope he is winning prizes somewhere.

Here several of the Beechers’ prize horses graze around what was the inn for stagecoach passengers, home to several ranchers, later the McDonald Creek School, and the barn.

The history of this rather recent art is nearly as convoluted as that of the land and buildings. When Mr. Beecher passed away in 2012, Mrs. Beecher sold the ranch and, with a daughter, is said to have loaded her pick-up truck and headed west, still the direction of choice when Montanans move on.

In August, 2019 the Roundup Museum called to say a gentleman had phoned them and wished to discuss the painting with the artist.

The Beechers’ buyer ran a larger cattle operation that had recruited cowboys to work there, and the caller, from Minnesota, had been one of these hands. Hanging on a wall of the heated bunkhouse where he and his wife lived was what, he discovered after cleaning, to be the “The Stage Station,” dirty and downgraded but undamaged. When he determined he was not cut out for cowboy work, and his wife had decided against bunkhouse living, he was given permission to take the painting, and the couple moved back to Minnesota. There, he said, they are very proud and happy to have it hanging over the sofa in their living room.

He said that, thanks to cattle, weather, or planned demolition, the buildings in the picture have been reduced to rubble and log pieces strewn over the ground, a dismal end to the memory of the stagecoach stop.