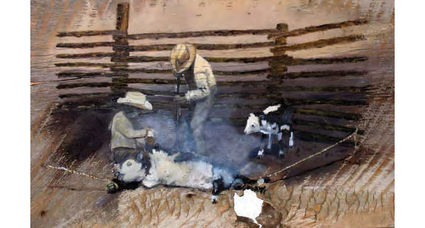 Old Time Branding By Larry & Jane Stanfel During the summer months, the Siemion boys worked as Charlie Hall's ranch hands, their widowed mother, as his cook. In this painting Steve, who passed away here several years ago, pins down the calf as his elder brother brands it. Charlie, himself, was known to be very camera-shy. This painting, executed on old barn wood, was selected as the 2008 icon for the annual Montana Cowboy Poetry Gathering in Lewistown.

To begin, Hall was not the first landowner; it was a Mr. Tupper of Chicago, reportedly a Mafia figure seeking to elude the FBI. If this is true, he was successful, and, along with a ranch, he also managed to find a much younger bride, a local schoolteacher.

Even today, standing on a wind-whipped hill in the midst of a summer day, one feels lonely out there – imagine a winter night! – and it's an unlikely place for a woman alone.

Therefore, in 1938 the widow Tupper sold the ranch, and Charles Henry Hall of Curtis, Nebraska, enters the story. Reportedly his family had been well-to-do, bu...